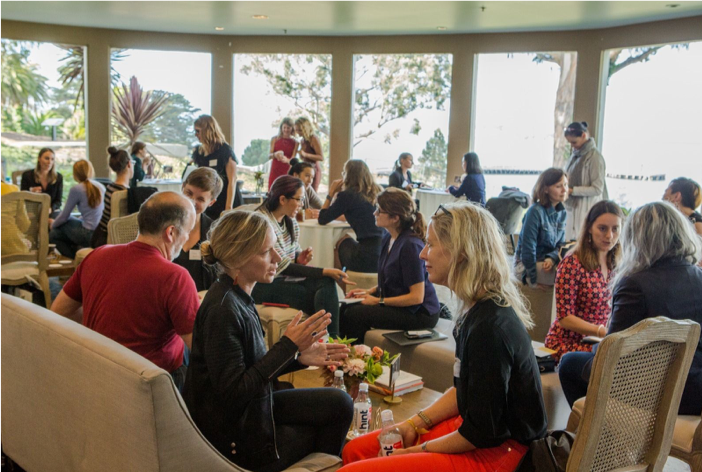 On November 19th, during Global Entrepreneurship Week, the digital networking platform for offline and online connections GUILD is opening their doors to Europe and Asia!

Building a direct bridge between Europe, Asia and Silicon Valley, the GUILD offers female entrepreneurs and aspiring entrepreneurs the opportunity to combine the best of Silicon Valley’s experts and methodologies with the European approach to building successful businesses. November 19th marks the date when the GUILD membership services expand to new regions and applications open to the GUILD Academy, the first global entrepreneurship program to serve the underserved and close the gender gap in entrepreneurship.

The newly established GUILD Academy entrepreneurship program focuses on supporting women to take the leap into entrepreneurship by equipping them with the best tools and knowledge, peer support and access to leading experts.The GUILD academy has created global alliances with big brands like WeWork Labs, Outsite, iFundWomen & Zazmic, who are excited to get behind the cause of closing the gender gap in entrepreneurship. A virtual demo day marks the end of the program with investor veterans from Lightspeed Ventures, Astia Angels, Golden Seeds, Spero Ventures, and many angel investors who already signed up to judge the pitches and award $20k software development prize by partner company Zazmic.

Applications are open now and close on January 1st 2020. The first program starts on January 13th 2020.

“I’m excited to bring this important program and community to Europe and Asia. I see so many new opportunities in building a more diverse entrepreneurial ecosystem. Not only will this lead to the tackling of more diverse challenges, it will also create more equality in many other domains, like female health. By having women build companies, they will focus more on female issues. Femtech is one of my favorite new verticals, in which mostly women are performing truly pioneering work in this long neglected field. Building on my personal experience with the US as well as the European startup ecosystem, I believe combining the best of both worlds can create magic and that is exactly what the GUILD is about, creating more and better scalable businesses, run by women.” Yonca Braeckman, Head of Global Expansion The GUILD

The GUILD is joining forces with the Startup Europe Networks in order to help advance female entrepreneurship in Central an Eastern Europe & the Western Balkan region. The partnership was concluded during Untold Stories Budapest, the new leading startup conference in the region. The partners of the network will be able to connect to their peers and investors in their country, their region and with Silicon Valley. CEE & Western Balkan members will be able to apply for a unique Founder-Funder matchmaking program, connecting the regional founders with Silicon Valley investors. The GUILD Academy will help women in the region with that last extra push they need to make their ideas reality.

“GUILD is a unique alliance of women who have paved the way for other women to thrive. I’m looking forward to starting the collaboration with GUILD and implementing joint actions to empower the female founders of Central and Easter Europe and Western Balkans.” Krisztina Toth, President and Co-Founder of Startup Europe Networks

“As the GUILD, we couldn’t be more excited to open these new opportunities to women in the CEE & Western Balkans together with the Startup Europe Networks. The network has leading ecosystem players of all membership countries and holds the promise to lift a region and advance entrepreneurship with attention to impact and diversity, which fits our values very much. Although, a growing number of initiatives focus on getting more women into entrepreneurship, data reveals alarming trends in the region for female entrepreneurs. Despite the fact that women’s formal education levels, on average, resemble or exceed those of men, women are still less likely to feel that they have the skills, knowledge and experience to start a business. This gender gap holds across all EU Member States and the gap was the largest in Poland (21%), the Slovak Republic (21%) and Hungary (20%) as per a 2016 policy brief by the OECD.”  Diana Pati, CEE Ambassador The GUILD

Meanwhile, women drive the majority of purchasing3 (70-80%), so there is a clear ROI argument to be made to have equal representation in all roles and especially in entrepreneurship to foster innovation in all product and service categories.

The data shows that there is a gap in representation of female founders and an even bigger funding gap. On the flipside, it also presents a huge opportunity for women to rise up and build ambitious innovative and scalable businesses around the world and for investors to take advantage of new underrepresented investments opportunities. We have seen an increase in female venture partners, female-led and focused investment funds and pledges4 for women equality in the US with Europe following suit. It points to higher attention to female presence in the entire lifecycle of entrepreneurship.

The argument that organizations see higher profitability when they are led by diverse teams and have more women in leadership and board positions are well documented and are gaining mainstream uptake.5 A recent study by BCG shows that if women and men around the world participated equally as entrepreneurs, global GDP could ultimately rise by approximately 3% to 6%, boosting the global economy by $2.5 trillion to $5 trillion.6

The promise of entrepreneurship as a force to address complex societal challenges can only grow and become more valid by including more diverse entrepreneurs, tackling more diverse challenges. Having entrepreneurship mirror our society to better serve that society is a logical conclusion. If we look at the efforts that have been made to be more inclusive when it comes to leadership positions, politics, board positions, and STEAM education, we see evidence that as  a society we are convinced of the benefits of including diverse perspectives. It is vital to build and nurture educational initiatives and structural reform to see the same thinking take foot in entrepreneurship and more specifically in scalable entrepreneurship.

The GUILD is built on the belief that the whole is more powerful than the sum of its pieces. By connecting the right people through ethical artificial intelligence and building a purpose driven global community, the GUILD leverages a unique combination of technology and human capital to create a modern guild for women to connect and grow in their careers, step into entrepreneurship and find encouragement and inspiration to lead. Much like the medieval guilds, the modern GUILD unites novices and masters and shares the knowledge and expertise of their members for the purpose of growing as a community.

“Guild / gild / noun a medieval association of craftsmen or merchants; an organization of people formed for mutual aid or the pursuit of a common goal.”

“We are proud to bring bring our network to a global audience and do our part in closing the gender gap in entrepreneurship. We assembled global innovators and some of Silicon Valley’s most reputable and relevant experts on building successful companies to share their knowledge with a global community of women and the next generation of female entrepreneurs”  Anne Cocquyt, Founder and CEO The GUILD

In the new GUILD Academy, experts like J Li, Jon Littman, Eileen Brewer, Chris Yeh, Mercedes Bent and many more that the GUILD team sourced from its 20,000 members in the US will share their expertise in easy to digest video modules and help answer any questions in live video sessions that any of the 50 applicants can attend during the 12 week entrepreneurship journey. The program rivals other online courses due to its unique design, high touch, peer accountability groups and support through the prominent experts as well as the GUILD team, comprised of serial entrepreneurs, startup mentors and advisors. A virtual demo day marks the end of the program with investor veterans from Lightspeed Ventures, Astia Angels, Golden Seeds, Spero Ventures, and many angel investors who already signed up to judge the pitches and award $20k software development prize by partner company Zazmic. Applications are open now and close on January 1st 2020. The first program starts on January 13th 2020.

For established entrepreneurs who have received first rounds of funding the GUILD offers access to quarterly founder funder programs and to their peers locally, regionally and globally in order for them to build a strong network and get information on important market trends, legal and financial considerations and funding opportunities before they raise new rounds of funding and expand to new markets.

Through the GUILD platform leaders, innovators and founders find peers, mentors and the opportunity to teach the next generation of women to learn, connect and grow together while never losing sight of self-care. Curated 1:1 introductions that fit members’ schedules create a new way of engaging with the modern guild of women supporting women.

As the GUILD is expanding its footprint in underserved hubs in Europe and Asia, the public is encouraged to join and take advantage of the new programs. Launch dates for local chapters will be announced on the GUILD website.